Posted on 1st December 2009 no comments

MUTATE BRITAIN presents ‘One Foot In The Grove’ 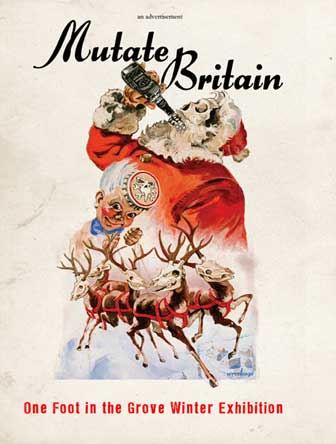 The October Mutate Britain art exhibition was so good they’re re-opening it for December. For the dates and times…skip to the end!
(PRESS RELEASE) A 15,000 square foot open air exhibition of Street Art, giant Sculpture and Installations, fully licensed for 1,250 people, underneath the West Way Road Bridge next to Portobello Road, Ladbroke Grove, London.
Following the success of their debut show ‘Behind the Shutters’ at the infamous Cordy House, the Mutate Britain team are pleased to announce ‘One Foot in the Grove’, an exhibition of painting and sculpture located in the heart of West London on the Portobello Road.

“For us this is a home coming, Ladbroke Grove means a lot to Joe and I, now we’re back home to put on a show that we hope will be remembered for its inspiring art, inclusive atmosphere and all round good times.” – Garfield Hackett
Since artists such as Futura 2000 (then touring with The Clash) and Mode 2 first painted the huge walls supporting the iconic West Way in the early 80s, they have been cited as a birthplace of British graffiti/street art culture. Almost 30 years later Street Art is a global artistic movement, rich with talent, diverse aesthetic styles and momentum sustained by passion. Now over 50 of its old school pioneers, infamous names and future masters are back to build a show that celebrates the depth and heritage of the movement. Expect surprise announcements to add to the mix of works by Mode 2, Matt Small, Dr. D, Part2ism, Best Ever and too many more to mention here.
Freehand painting, stencils and paste ups from three to thirty feet high adorn the huge walls that provide an atmospheric setting for this event, made unique thanks to collaborators The Mutoid Waste Company. Giant Mutoid sculptures made from refuse on a military scale are carefully curated to build the Mutate Britain atmosphere. Helicopters, dinosaurs and prancing horses sculpted and engineered by Joe Rush, Alex Wreckage and Sam Haggerty punctuate the floor space alongside Giles Walker’s pole dancing robots, LRRY the fire breathing bull and a three dimensional holographic human face. One Foot in the Grove is a unique chance to see and interact with these mind blowing creations usually only ever witnessed at the world’s most iconic festivals. Burning Man in Arizona, The Fuji Rock Festival and Glastonbury’s Trash City are the some of The Mutoid Waste Company’s favourite playgrounds.
“Mixing our artwork into a big event where people have a good time makes it come alive, and that’s what we’re all about – making our work accessible by putting on a proper party.” – Joe Rush
A huge Royal Academy’s Summer Exhibition style wall presents framed stencils and originals available to buy whilst the he ‘photograff’ wall provides a visual reference for the history of Ladbroke Grove street culture with contributions from Henry Chalfant amongst others. An extensive seating area offers visitors the perfect chance to relax and take in these amazing surroundings while enjoying our licensed bar, café and finger-licking food provided by none other than Andi Oliver and Neneh Cherry. One Foot in the Grove replaces the sterile gallery experience with a festival atmosphere that makes Mutate Britain’s art truly accessible for crowds of all kinds.
‘ONE FOOT IN THE GROVE’
Location: 3-6 Acklam Rd, London, W10 5YU
Nearest Tube Ladbroke Grove
Opening times:
Opens December 4th to December 20th – FRI / SAT / SUN
FRI 12-10pm / SAT 12-10pm (NO ENTRY AFTER 9PM)
SUN 12-9pm (NO ENTRY AFTER 8PM)
MON 21st – WEDS 23rd – Limited opening, sales gallery only.
MUTATE BRITAIN AT THE CROSSFIRE XMAS SKATE JAM 2009!
In further news, on December 12th, Mutate Britain present a spectacular skate installation built by The Mutoid Waste Company for the now legendary annual Crossfire Xmas Skateboard Jam. This collaboration highlights the mutual respect between the two events and the mutated vehicle will have to be seen to be believed! Tickets to cover the two events will be available on the door at The Crossfire Skate Jam. Entry is just down the road from One Foot In The Grove at Bay Sixty 6 Skatepark, 66-67 Acklam Road, London W10 5YU from 12pm-6pm. Tel: 0208 962 8282
It will be a ‘Gangster Themed Event’ so literally expect Mobs of kids!