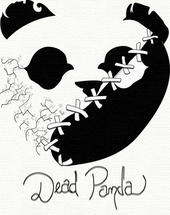 Tripped-out L.A. beatfreaks Dead Panda have just dropped a video for their creepy track Million Dollar Dub, directed by Montgomery Fisher. A murky narrative that appears to follow a homicidal bent copper tracking down the band with intent to kill includes such diverse elements as: a bit of street-skating, a sinister sacrificial teddy-bear and footage of the band performing amidst dry ice. Oh – and it goes a bit David Lynch at the end when the cop pulls the trigger. If you don’t know Dead Panda, imagine moody proto-goths Bauhaus getting all jiggy with moody trip-hoppers Massive Attack and you’ll get the picture.

Dead Panda make dark, dub-influenced electronica so it’s only natural that they would hail from than Los Angeles – a city more commonly associated with Hollywood, beach culture and rock music. Totalling five personnel – Mary, Saint Brendan, Box-Car-Los, Amy and Eric – the band released debut LP Million Dollar Gun back in 2005. As they’re no strangers to playing either the Roxy or the Viper Rooms – two L.A. clubs that are internationally renowned and not always for the right reasons – the Monkey thought they might have a few tales to tell if the right questions were posed. Here’s what they had to say:
Monkeyboxing (MB): If Million Dollar Gun was released in 2005 how long have you guys been together – in fact how did you get together come to that?
Mary: The mayhem was spawned in Long Beach, California.
Brendan: The first thing we did was record the EP. It was re-mixed and mastered and re-released in 2007. We’ve been playing out for a couple years.
Carlos: Who can really tell? Time is of no importance.
MB: What is a Million Dollar Gun by the way?
Brendan: Million Dollar Gun is about a frame-up, an innocent person convicted of something they did not do. The gun is a symbol of ‘the system’.
Mary: There is salvation in the story.
Carlos: It is the fate of mankind.
MB: I notice you list Massive Attack and Portishead among your influences – interesting because both bands are from Bristol (UK) where monkeyboxing.com is based…but the Monkey has also been to L.A. and wonders how a band came to be making claustrophobic, stoned beats in the sunny epicentre of U.S. rock music?
Amy: Wear your shades and don’t listen to the radio.
Carlos: Each of us has spent extensive time outside of the realm.
Brendan: Influences – what we listen to and what we partake in. I crave a low and slow sound I thrive in psychedelic grooves. Nobody in L.A. sounds like us, which suits me just fine.
MB: L.A. has long been associated with the debauched and weird in music – I’m thinking The Doors, Jane’s Addiction – that sort of thing – what is the most debauched and weird thing that’s ever happened at a Dead Panda gig?
Mary: It’s a toss between sex going on in the audience or two words – Eagle Eye!
Amy: Some guy making out with a speaker that was pumping out beats.
Brendan: We played at Good Hurt on 04/20, then stood in the middle of Venice Blvd. and burned one. Sometimes we smoke in elevators. Hell, we smoke everywhere!
MB: Monkeyboxing did a background check on you guys – you’re on urbandictionary.com but not wikipedia…Care to comment?
Mary: Wow! I wasn’t aware.
Amy: Because Wikipedia is uptight.
Brendan: There is some sort of prejudice regarding the name.
MB: What you got in the pipeline in the way of tours, releases, that sort of thing?
Mary: We are currently working on a new album. We are looking into touring overseas this year. We are also looking forward to working with David J. from BauHaus on a few tracks.
MB: The voice you sampled on Kaper really sounds like Ted Bundy…
Brendan: That’s a cop calling my house, looking for me.
Mary: Bad cookie!
Eric: Hey, how does the Monkey know what Ted Bundy sounds like?
MB: Haha – that’s easy – Jane’s Addiction sampled him on Ted, Just Admit It – I’m more worried about why the LAPD are employing an undead serial killer. Ahem – anyway – the last word is yours anything you’d like to say?
Mary: Demand Genuine Dead Panda.
Carlos: Purple Monkey Dishwasher.
Amy: Thanks for the time. I’ve never been to the UK (would love to go) but my words are! I’ll take that for now 🙂