In just under a month another veteran contemporary funk and soul act places its ‘difficult third LP’ cards on the table and this time it’s the turn of Cookin’ On 3 Burners – a.k.a. the ‘other’ band of Oz funk and soul kingpin, Lance Ferguson. Two previous LPs have dealt out hard-hitting, tightly-played instro funk, soul and jazz-funk that has become increasingly END_OF_DOCUMENT_TOKEN_TO_BE_REPLACED

Sniffing at the heels of the recently unveiled title track comes Aceyalone‘s latest full-length project Leanin’ On Slick. It finds the Freestyle Fellowship rapper continuing to reinvent retro-hop with the assistance (once more) of producer Bionik. Where the former album favoured Motown and doo-wop flavours however, this sees Acey return to the fine tradition of funky/ soulful END_OF_DOCUMENT_TOKEN_TO_BE_REPLACED (Full album review HERE) Heads up, Aceyalone’s back next month in fine style with a thirteen track LP, Leanin On Slick which only features Cee-Lo Green, BIONIK and Daniel Merriweather! For those not up to speed with Acey, let’s put it like this: he used to rap in West Coast underground legends Freestyle Fellowship and dropped one of the best freestyle deliveries I ever saw, acapella, on Kevin Fitzgerald’s END_OF_DOCUMENT_TOKEN_TO_BE_REPLACED 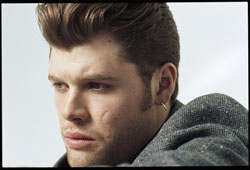 More smug and puke-inducing than one of those middle class couples who don’t have the bollocks to admit they’re Tories, this will doubtless play on said couples’ car stereo as they take little Poppy and Jasper to pony club. Also, listening to it, I noticed my life-force started to ebb away like it does when I’m in the ‘helpline’ queue of a company so massive that they couldn’t care less if you wait fifty minutes at premium rates and, in fact, might just cut you off at the end of that time anyway, fuck you very much. Ironic really, as toss like this is exactly the sort of thing picked by faceless multinationals to soundtrack your suffering while they claim to experience, ‘unusually high call volumes’. Wankers.
Watch Water & A Flame video HERE I’ll tell you what seems to be impossible – creating a crossover nu-soul hit that keeps both the masses and the heads happy. Ever a greasy pole to climb, so far the only act demonstrating anything like the superhuman grip necessary has been Gnarls Barkley. At least since the seventies. Genuinely authentic sounding funk-soul revivalists like Sharon Jones and co. haven’t managed to attract a non-specialist audience (though it’s true that Mark Ronson has employed Jones’ band The Dap Kings – but the fact remains largely unknown) while Amy and the like never had any underground kudos in the first place. Impossible – one of the more convincing cuts from the recent Love & War LP, finds Merriweather doing his best with a melody influenced as much by The Mamas & The Papas as by Ike and Tina, and Ronson provides his usual breakbeat (yes, I did mean to use the singular) but he is no Cee-Lo and Ronson is no Dangermouse. One for the charts then and not the heads.
Out 17 August on Allido/ Columbia
Oh yeah – here’s the vid… 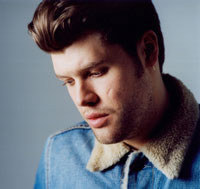 (Love & War) has retro pastiches of grits-and-gravy ‘60s southern funk and the smoother ‘70s soul (UNCUT)
Indisputably soulful (Daniel Merriweather) comes across in the music as unstintingly honest and expressive (GUARDIAN)
(Love & War) is a consummate modern soul record (DAILY MAIL)
(Daniel Merriweather) is so naturally gifted just opening his mouth in the vocal booth can let loose some laryngeal magic (SUNDAY TIMES CULTURE)
For much of 2009 the airwaves and charts have been dominated by a string of upcoming female solo artists: La Roux, Little Boots, Lady Gaga, Pixie Lott et al, but one male solo artist has stood out: Daniel Merriweather.

Daniel Merriweather’s, critically acclaimed and highly anticipated album, ‘Love & War’, debuted at No. 2 in the Official UK album chart and has now shipped in excess of 180,000 copies, certifying it gold. Meanwhile, ‘Red’, the anthemic follow-up single to the airplay smash ‘Change’, was a top 3 airplay hit and entered the chart at No. 5 where it stayed for over 4 weeks, and has now sold over 200,000 copies.
Other highlights of Daniel Merriweather’s year to date include a recent sold-out gig at the Bloomsbury Ballroom on June 3rd 2009, an outstanding performance of ‘Cigarettes’, ‘Stop Me’ and ‘Change’ on Later With Jools, and a stellar appearance at Radio 1’s Big Weekend.

‘Impossible’ which is the 3rd single to be released from ‘Love & War’, is an up-tempo funk influenced record. With a lively bass, a catchy melody and heartfelt lyrics, its subject matter is sad while its shuffle is infectious. A key moment on ‘Love & War’, recorded during the albums latter stages, ‘Impossible’ shows Daniel’s uniquely soulful voice at its best. In addition to releasing ‘Impossible’, Daniel Merriweather will be playing at Wireless, Oxegen, T in the Park, T4’s on the Beach and V Festival.

2009 may have been dubbed the year for the girls, but for Daniel Merriweather it is the year he has emerged into a star in his own right, proving he is now a long, long way from where he began in Melbourne, busking on a street corner just to earn a buck. 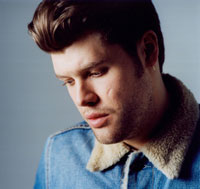 Ronson and Merriweather cohort Seb Chew lobs together a minimix of the better tracks (and one of the worst) off the Love & War album with such luminaries as ATCQ, Mos Def and – er – some other people in an effort to garner young Daniel some extra kudos by association. And it kind of works – except for the bit at the end which features Adele. Get that puppy here:
Daniel Merriweather – Seb Chew minimix “You took something perfect and painted it red,” sings Merriweather on this, where ‘painting something red’ is presumably to ruin it beyond redemption. Ironic really, since this song is yet another pastiche of 70s Stevie Wonder and Elton John, that yet again makes you want to avoid all songs that sound similar. And when I say ‘similar’ I mean both the originals (which is a shame) and the entire back catalogues of balladeering boy bands everywhere which also draw from and subsequently pollute the same wellspring with the rotting sheep of their careers. ‘Nu-soul’ my arse. If anyone can point out how this is substantially different from the last power ballad released by Robbie Williams, let me know. Despite that and the fact that this boy can’t help sounding over-produced even when he isn’t, plus the fact that he can actually sing, this will probably make a sizeable splash (not unlike that of a sheep landing in a well) in the pop charts and be on your girlfriend’s phone before you can say illegal download.
Released 14 May on Allido/ Columbia
Feel free to check the video below and head on over to the Merriweather’s website which, it has to be said, features substantially less awful tracks.