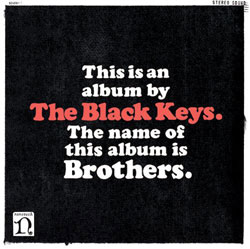 Continuing the ‘short’ theme of late as the monkey catches up with a backlog, today’s guest review style is that of shit, free, UK newspaper Metro. Obviously, this review is literate though…
Much has been made of the fact that for this LP the band availed themselves of the legendary soul studios at Muscle Shoals to lay down their latest offering of scuzzy blues-fuzz. There’ll no doubt be wordy analyses of The Black Keys’ Brothers all over the interweb but why waste time suffering the pretension when it can be pithily summed up as having (on the one hand) the subtler melodies of the Dangermouse-produced last LP Attack & Release rather than the instant-fix hooks of the first three LPs, while (on the other hand) they’ve gone back to sounding like they recorded the whole thing in Victorian public toilet. Or to put it another way, better overall than (say) the largely dirge-like Magic Potion but lacks a Your Touch.

Listen to The Black Keys – Brothers