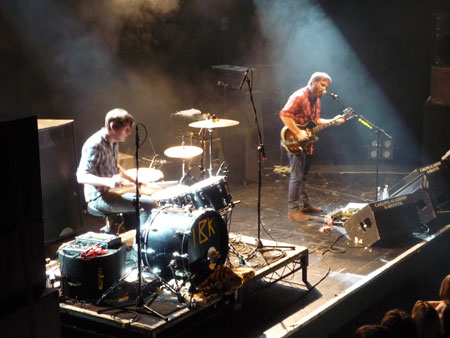 I’ve never been asked to take my gum out on the way into a venue before, though I guess there’s a first time for everything – anyway – that is precisely what happened when I got to the doors of this one. I put another piece in on the inside of course – (remember that as it’ll be important later on) and hoped that it didn’t bode badly for the evening – though I had my doubts when the first support act came on. A trio, competent but dull, they were leavened only by the size of the drummer’s beard (about the size of a small raccoon) and guitarist who bore a passing resemblance to Thomas Chong and who looked like he’d just wandered in off the Haight-Ashbury circa nineteen sixty eight. The second support (whose band name again eluded me) were a charismatic, skilled and obviously mental Kiwi/ Aussie combo who bonded well with the crowd but were generally strangers to the conventional song structure which the crowd so clearly wanted.

Still, ‘giving them what they want’ is both Dan Auerbach and Patrick Carney’s middle name – arriving as they did with little fanfare and pummelling the crowd with a welter of mammoth blues riffs and feedback. After a couple of tracks Auerbach mumbled “I’m Dan and this is Patrick,” – a man of few words then – though in comparison to Carney (who, as I recall said nothing for the entire gig and is apparently a man of no words) he was a conversational titan. Here are two men, I thought, who believe their music speaks for itself and – as Auerbach riffed the intro of a mighty version of Girl Is On My Mind – I had no grounds for disagreement whatsoever. Tracks from Rubber Factory and first album The Big Come Up were thick on the ground tonight though forthcoming single and standout from current LP Attack & Release – Same Old Thing got a pretty thorough seeing to. 10 A.M. Automatic got more heads nodding in a (from my vantage point) fairly static audience and an almost Hendrix-like version of Stackshot Billy’s stomp finally shifted feet. Strange Times finally saw hands in the air and when Auerbach muttered, “Let’s keep things moving,” you knew from your goosebumps that Magic Potion highlight Your Touch was coming next, and that it would be massive. Which it was. Psychotic Girl was in the set list somewhere, as was Have Love Will Travel and a cover – which someone said was Captain Beefheart and may have been I’m Glad. No doubt someone who’s even more of a ‘Keys-spod than I am can confirm that. Their live version of I Got Mine even prompted a mate of mine to comment that tonight the Keys were like a sort of ‘blues Rage Against The Machine’ – though the analogy was a reference to the fury and fire of the band’s playing rather than any involvement in radical politics. As Auerbach said the band’s goodbyes (yeah – like they weren’t coming back from an encore) I headed to the gents. On my way back a heavy hand falls on my shoulder and I turn round to see a large alpha-male (well – physically anyway) thrust a half-pint glass at my face and a split second later I realised that I wasn’t actually being assaulted – it was security. Apparently he wanted my gum as it’s not allowed inside the building. And you can see why – after all it is a dangerous and prohibited substance responsible for the corruption of many a youth as well as a mortal danger to a venue’s licence and in these respects quite unlike the skunk I smell every time I go to a hip-hop gig there.

The ‘Keys did return for a two track encore but I already had good reasons to be on my way by the middle of their final track. I left the building thinking that I do like my bands to have a bit of a banter with the crowd but if I have to choose between the banter and the music – the music wins every time – especially when it’s this good.