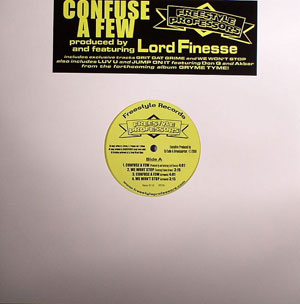 Hey – they don’t make them like this anymore do they? Erm, except obviously they do because here’s this, the official 12” for upcoming, long-awaited LP Gryme Tyme due in June – and I’ve had that straight from the horse’s mouth. Well, Branesparker’s at least. Anyway, DITC affiliates and underground legends Freestyle Professors are back with their super-heavy, crate diggin’, self-styled Bronx-grimey sound to bring you five all-new tracks, two of which you also get as instrumentals. I’m confused. Isn’t this an EP? Whatever, Branesparker himself produces four of the five, two of which drop a bit of social commentary and get their dark on putting me in mind of Non-Phixion or something: the Lord Finesse produced (and featuring), title track and Jump On It on which original FP member Don Q and Akbar stop by. Personally, I was more excited by the funkier cuts and crazy battle rhymes with which the other three are packed – what with Stanley Grimes tearing it up on, We Won’t Stop “Thought you had testicles, turned out to be some ovaries/ Get out of here, go back to school, be what you supposed to be” and the epic church organ on Dat Grit Grime. The track I’ve really been waiting for though, since they dropped the video last year, is the ridiculously mighty breaks and rhymes of Luv U – another Stanley Grimes hook-up. And because they’re such jokers, Freestyle Professors have hidden this away at the end of side two of the vinyl. How to sum this record up? A rhyme from Dat Grit Grime will suffice – “We don’t give a fuck if you call it old school/ See that’s soulful…”
Out now on Freestyle US. Don’t snooze!