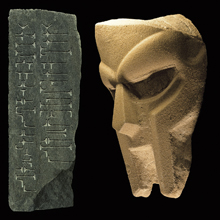 There are those who will have been desperately waiting, dicks in hand, for this to come out. They will dig the blunted late nineties sound that characterises the first two thirds of this LP and snicker away at the cleverness of Doom’s verse in their little bedrooms. Don’t get me wrong – the man’s lyrics have always been fire – but even when he was more prolific than he has been of late, his output was patchy in terms of beats and cuts, and that is also an issue with this LP. Should you be new to the work of Daniel Dumile (a.k.a Zev Love X, King Geedorah and Viktor Vaughn), he’s been putting out stuff like this under the MF Doom name since Operation Doomsday in 1999 and when I say ‘like this’ I mean esoteric samples, largely drawn from old American cartoons and superhero serials, blunted, dusty, quirky beats and his trademark surreal flows. That’s all well and good, but if MM Food was Operation Doomsday Pt. II, this is Pt. III and while it isn’t qualitatively worse on the whole than previous efforts, it’s lacking some freshness.
The J-Dilla produced Gazzillion Ear is a promising opener which trips along on a Middle Eastern melody but second track Ballskin musically plods – disappointing because Doom drops tight self-referential couplets like, “The flow is towin’ precision as a afro-trim/ All big letters but it isn’t no acronym.” Raekwon vehicle Yessir! picks up the pace but also underwhelms musically. And then there’s shit like eighth track Batty Boyz which is frankly embarrassing. Oh what? It’s a post-modern exploration of the homoerotic subtexts of superhero partnerships? Fuck off. “Oh shoot get a load of that fruit…Bustin’ Batman, head bobbin’, slobbin’ Robin’s knob”. Grow up for fuck’s sake. Is he a fifteen year old insecure about his sexuality or something?
The presence of Ghostface Killah brings some fresh air with Angelz in a 70s orchestral-loop-backed Charlie’s Angels-inspired tale of undercover chicks fighting crime in NYC and Doom’s unconventionality is reflected in his choice of sample on Cellz. Basically an apocalyptic reading by 60s and 70s literary sleazeball poet Charles Bukowski, it now pretty much sounds like a description of modern America.
It’s also an interesting state of affairs when one of the better tracks on a Doom LP doesn’t even feature Doom – so Empress Sharhh’s claim to be Still Dope is one that Doom might want to have a think about. The ultra-short Microwave Mayo rests on a heavy bass groove and Doom redeems himself with throwaway lines like “You could cut the tension with a switch blade/ And serve it on the same plate of hors d’oeuvres that a witch made.” Kurious-collaboration More Rhymin’s spare piano-tinkling melody is promising but at a little over one and a half minutes it’s barely got going before it’s ended. There is a treat towards the end, however, with Supervillainz, although, again at under three minutes, it weighs in on the short side but does employ an inventive staccato beat of the kind you wish he’d used a bit more.
I dunno – the lyrics seem generally seem better in the first half while the beats and cuts seem better in the second half. Something doesn’t quite gel with this LP and if you’re new to Doom and think this is dope you’ll be tempted to seek out older (and better) material. If you’re a Doom completist you’ll get yourself a copy of this LP whatever I say – but you’ll know there’s older and better material. Classy cover though.
Out 24 March on Lex Records

Finally Lex Records have announced 24 March 2009 as the revised release date for the new Doom (oops – my bad – I mean ‘DOOM’) LP Born Like This READ DOOM – Born Like This – LP review HERE. It is further rumoured on the net that this might not be the only release from DOOM a.k.a. the artist formerly known as ‘MF’ Doom, (or Daniel Dumile to his mum) this year. It’d be funny if the delay was all about the name change too. Imagine – you send your artwork off to the printers only to find out that the ‘MF’ hadn’t been dropped or it said ‘into’ instead of ‘like’. Christ – what a pain. It’d be enough to embitter you against the world for the remainder of your natural life and hide your scarred visage behind a metal mask if a former record label hadn’t already royally pissed you off by shelving your old school masterpiece because of – er – your front cover design.

Born Like This a.k.a the LP formerly known as Born Into This sees production duties mainly shared between DOOM and Jake One and features guests that include Raekwon and Ghostface. Tracklist below. Check back here for a review soon…