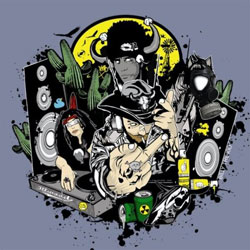 ‘Billy the Kid’ wasn’t Billy the Kid’s real name. Perhaps unsurprisingly, ‘Koaste’ isn’t Koaste’s either. Here, however, the latter likens himself to the former, characterising himself as a renegade who doesn’t give a shit if you’re feeling his steelo or not, “If you don’t like me, then you don’t like me/ I think it’s pretty likely that you’re not like me.” Not quite Shakespeare admittedly and a little pedestrian for one of the monkey’s favourite UK emcees – it’s the price you pay for setting such a high standard – anything that’s merely ok draws disproportionate attention. Tom Caruana’s beat meanwhile is more than functionally funky as is the slightly slower and more bass-heavy Black Grass generated effort on Blabbermouth which comes over a bit like one of those Ugly Duckling cuts that isn’t totally saturated in horns. On this, Koaste tackles low-down, shallow, gossiping ho’s and seems to become lyrically inspired in his vitriol “Man this girl is so two-faced/ She could have a conversation with herself if the mood takes,” and even finds room for politically-charged figurative insults – “Attention-seeker, grade ‘A’ hanger on/ Trying to hide a shady side like Dave Cameron.” That’s more like it my son! A radio edit of each of these tracks later and we wind up with Il Padrino – something that I’m sure has been kicking around for a while. Swapping the imagery of the Old West for that of the Cosa Nostra, Koaste bigs himself up against a slower, more doomy beat, but the rhymes are better again – “The Godfather, with more flow than hot lava.” Now that is what I’m talkin’ about – might as well end on a high note eh? As Koaste points out earlier on, “You can call it boom-bap or straight up Brit-hop,” it’s not that you haven’t heard this sort of thing before more that he wants you to check the execution.
Out now on Heroic Recordings