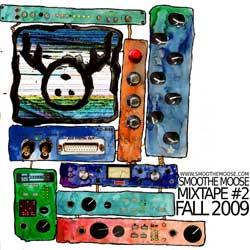 The way things have been going the last few years, the mash-up has been giving the cover version a bit of a spanking in terms of being everyone’s favourite means of reinterpreting the work of others. Undeterred, the ridiculously named Smoothe Moose collective have a crack at the covers game and manage it so successfully nearly everyone else just got owned. Nobody will believe me if I say, for example, that their re-imagining of Black Uhuru member Don Carlos ‘Laser Beam (complete with horns from the MK Groove Orchestra and vocals by Becca Stevens) sounds like Pharaoh Sanders and Mad Professor hooking up with Liz Cocteau – so I figured the only way to avoid an accusation of hyperbol-isation would be to embed the whole damn ‘fall’ (‘autumn’ to those in the know) mixtape which is brimful of chilled delights. Judging by Massive Attack’s new stuff, they should probably check this out – the miserable fuckers. Chek:
Smoothe Moose Mixtape #2 : Fall 2009 by smoothemoose