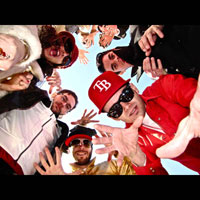 Read full album review HERE
By way of promoting their forthcoming second full length album Never Get Out Of This Funk Alive ( due 12 July 2010) Texan heavy funk crew T Bird & The Breaks offer up not one, but two huge slabs of funk as freely downloadable promo singles. The LP title track Never Get Out Of This Funk Alive is a bumping, Ohio Players-esque kind of thang with a little more of the seventies in it than anything off previous album Learn About It while The Clap Hands Song is the band’s take on soul queen Shirley Ellis’s The Clapping Song, a driving slice of heavy soul/ sixties-style rnb that gives The Breaks’ backing singers a more substantial role than they’ve had before. You can expect some additional lyrics from T Bird himself, Tim Crane, on that one – hence the slightly different title. As usual, the production is off the hook on both tracks. Check back soon for news on the album.

One Response to T BIRD & THE BREAKS: Never Get Out Of This Funk Alive + The Clap Hands Song (2011) – free download