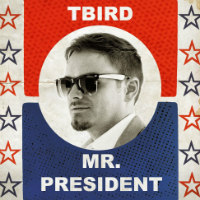 Criminally underrated, the now de-funked T-Bird & The Breaks have left a big hole in the global underground funk and soul scene so it’s good news to hear that gravel-voiced, master-lyricist T-Bird, a.k.a Tim Crane, is back in the saddle with a new single/ video, Mr President, as well as an album, Bottle Fulla Rainbows, in the offing as well. Until that LP comes out though – here’s a single that like all the best protest songs (Impeach The President for example) refrains from naming the target a) because the target is obvious and b) the song remains relevant in case a similar target (though you’d like to think that wouldn’t be possible) should come along in the future. Not one to pass up an opportunity to take the piss however, T-Bird ensures that as well as a simple drum break and Beatles-like simplicity/ear for a pop ditty, Mr President also contains lashings of sarcastic slide trombone and irreverent whistling. The only thing perhaps that could have been improved upon here (and T-Bird is clearly too nice to bother) would have been for the first letter of the first word of each lyrical line to spell out some sort of message to Trump like in that resignation letter from the Presidential Committee of Arts – though that does give the monkey an idea.
(Out now HERE)