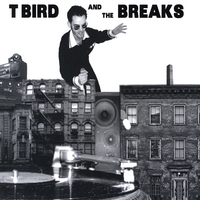 A bit like the winning fat man at a pie-eating contest, the worldwide funk and soul scene is splitting at the seams with talent and given the amount of competition, any band wanting to make a name for themselves these days needs to make damn sure they have some sort of a distinctive spin on the genre. Enter T-Bird & The Breaks who work a ‘Wilson Pickett fronting the JBs’ kind of angle. Incidentally while you’re making a name for yourselves it’s not going to harm you to make up a cool name for yourselves either. Since only a fool is really going to argue that ‘T-Bird & The Breaks’ is anything other than a cool name it only remains for this lot to establish a rep and with self-produced debut LP Learn About It they’re going the right way about it.
If they do actually sound something like Wilson Pickett fronting the JBs it’ll be for two reasons. Firstly frontman T-Bird, a.k.a. Tim Crane, whose sandpapered-whiskey vocals provide soulful authenticity and secondly, The Breaks. The Breaks (a.k.a. the rest of the band) comprise roughly half the population of Austin, Texas, hold down some super-heavy grooves, drop some fat – er – breaks and number amongst themselves a bevy of female backing vocalists.
A substantial portion of the LP consists of bluesy funk – no mincing around with Hammond organs for this lot – this shit’ll put hairs on your chest. Opening stomper Two Tone Cadillac, has a guitar riff that recalls the one on the Beastie Boys’ Funky Boss, and yet, despite it’s impact, you’ll find your affections transferred to second track Esmerelda (the highlight among the album’s many highlights) within three bars of it’s kicking off. This blues-funk-groove is giant – it’s got hip-shaking breaks, an insistent bass pulse and cheeky lyrics about some wild chick. Blackberry Brandy, which is next, eschews syncopated rhythms for a more swinging bluesy one and demonstrates Crane’s facility for writing classic lyrics as he belts out lines like, “I know I should be looking for a job/ But it sounds too much like work to me.” Then you’ve got All The Blame – another slow one with tremoloed-out guitar strains that explores that staple blues theme of the man who doesn’t treat his woman right. Stand Up is a swaggering uptempo funk strut, and Juice opens with an insistent piano, shortly before the arrival of an energetic break and sweet horn riffs. Of the last three tracks Baby Bottle is a wah-wah toting funky bounce, while the other two appeared on the band’s demo EP. Take Time is an uptempo classic – all driving horns and guitar and last track Sunday On My Own is – not unexpectedly – another slow one and finds Crane mourning a lost love and in the process demonstrating his considerable vocal range.
T-Bird and The Breaks mentally inhabit the twilit world of smoky bars where wearing a sharp suit, alligator shoes and playing to pay for your bourbon is what it’s all about. If you don’t know what that feels like – you might when you’ve heard this. This is a band with lots of love and plenty of soul.

Listen to/ Buy T-Bird & The Breaks – Learn About It