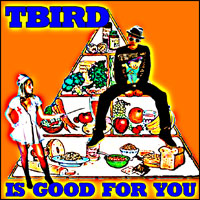 Amazingly, this has been out since January. For those not in the know, let me explain that T Bird a.k.a. Tim Crane is the gravel-voiced front-man of criminally underexposed Texan heavy funk and soul outfit T Bird & The Breaks whose funky soul bomb Esmerelda from the 2009 debut, Learn About It recently featured on the monkeyboxing mixtape Filthy Rhythm, Dirty Soul. The band have dropped a number of breaks-heavy funk nuggets since Learn About It’s release and now T Bird Is Good For You sees Crane stepping out on his own.

Given that he’s a man who loves his hip-hop as much as his funk and soul, it’s no surprise that Crane ends up at the place where G Love, the Beastie Boys and indeed his own band intersect. Thus T is as liable to be rapping as singing on this – much like Philly legend G Love. But if T raps a bit like G, there’s no mistaking their singing voices since T’s sandpaper vocals trump G’s strangled cat every time and, of course, fans of the Breaks will already be aware of Crane’s ear for a dope lyric – “Sex ain’t dirty unless you’re doing it right,” for example. Sprinkling the occasional programmed beat amongst either actual or sampled live drumming, the blues funk dial is frequently maxing out – check the spit and sawdust groove of Diggin’ In The Dirt or the uptempo Goin’ Down To The Bustop complete with keys and soul-backing vox.

“It’s just kinda some shit I put together,” he modestly said of the project recently with all the conviction of the dressed-to-kill woman’s, “What these old things?” . Make no mistake, you would have paid good money for this, even a couple of years ago, on a solid format you can hold in your hands. But like T says, “And I’m frontin’ cartoons like Mickey Mouse/ In my two tone Cadillac/ Someday I’ll make that happen if I get some airplay/ But till then I’ll write these tracks for free/ Like a bat outta’ hell smokin’ PCP.”

If it’s been too long since your last T Bird & The Breaks fix or you weren’t down with G Love’s recent country venture Fixin’ To Die this’ll be right up your street. Frankly with free music this good – downloading is the least you can do since T Bird is most definitely good for you. Cop some of that action here: