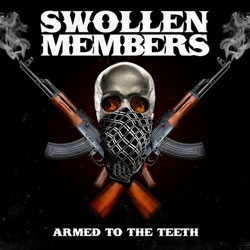 It would appear that times have been hard for Swollen Members recently. Never mind because they return with a full-length at the end of next month. And from the bits of it they’ve exposed on their myspace it sounds like it’s going to be banging…anyway – that’s enough limp puns – have a FREE DOWNLOAD of album tracks Red Dragon, Bollywood Chick and Cross Fire and check the Warrior video below the tracklist…
(PRESS RELEASE)
After Enduring Drug Addiction, The Collapse Of Their Former Record Label And Legal Issues, Swollen Members Return Triumphantly With New LP, Armed To The Teeth, Which Will Be Released On 10-27-09 And It Includes Guest Appearances From Talib Kweli, Everlast, Glasses Malone and Slaine
Vancouver based Swollen Members and Battle Axe Records have formed a partnership with California based Suburban Noize Records for the release of the group’s upcoming new projects. The first release under the partnership will be Swollen Members heavily anticipated new studio album “Armed To The Teeth”, which is slated for release October 27th, 2009 through Suburban Noize. The group also plans to release a greatest hits disc and the debut album from Battle Axe Warriors, a new project featuring Swollen Members along with newcomer Tre Nyce, later this year.
“We’re very excited to announce we’ve signed with Suburban Noize Records for the release of our new album and upcoming projects,” said Mad Child from Swollen Members in a statement. “When we decided to make calls to interested labels and shop our new material, Suburban Noize was the first and last call I had to make. After talking with them, I knew right away they were the best home for us because they were already fans of our music. We respect what the label has done for artists like La Coka Nostra and Kottonmouth Kings and we know that they will do everything that they can to push Swollen Members on a global level.”
Swollen Members have been clawing their way to the top of the hip-hop totem pole since their inception. Founded by two of the game’s best MCs, Mad Child and Prevail, along with the help of DJ Rob The Viking, the group has released an impressive back catalog of classic albums and collaborated with some of hip-hop’s biggest names, including Chali 2na (Jurassic 5), Dilated Peoples and Everlast. Meanwhile the group has rocked stages from Los Angeles to Japan performing hundreds of shows a year in front of massive audiences with underground legends like Tech N9ne to mainstream chart toppers like Nelly Furtado, Ghostface and Black Eyed Peas.
With the release of their new studio effort “Armed To The Teeth” and the upcoming Battle Axe Warriors album, Swollen Members are ready to let the industry and fans know they are no longer the world’s best kept secret, but some of the most lethal MCs in the game. “Armed To The Teeth” is a snapshot of the trials and tribulations the group endured during the past two years, including Mad Child’s battle with drug addiction, the collapse of their former record label and the legal troubles that plagued the group throughout the recording process.

One Response to SWOLLEN MEMBERS: New release – Armed To The Teeth LP