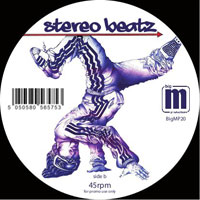 Admittedly this is a bit late but there’s cause to celebrate in the Stereo Beatz camp since it ain’t final til it’s vinyl and he must feel like he’s arrived at last with this 12″ after two digital releases on BigM. Put it this way – he certainly makes his presence felt here with four slices of heavyweight funky breaks crunch. Between them Rock Da Funk, Kick It, Get Your Trumpets, and Funky Gripster rework Vanilla Ice (no, really), Run DMC, a heavily worked sample of the M&S band’s Egg Roll and Ice T protégé Gripsta into some 21st century ghetto funk friendly dancefloor shapes.
(Out now on BigM)