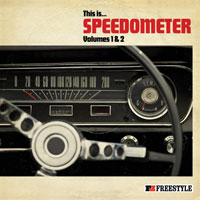 The kings of espresso-funk get all retrospective on your ass with this gigantic double album consisting of Speedometer’s first two LPs in their entirety. While they always spend far too much time flirting with the jazzy dark side for me, they still can’t help getting down and dirty every now and then so my previous lack of investigation meant that instrumentals like Mullet and vocal cut The Best You Can came as something of a surprise. A lesson then, if it were needed, that you should never underestimate the redemptive power of a good funk. It hasn’t escaped the monkey’s attention, however, that the sound formerly known as ‘acid jazz’ – which a proportion of the tracks on here certainly qualify as – has lately been masquerading as ‘deep funk’ for its own evil purposes. A sobering thought…
(Out 28 February 2011 on Freestyle Records)
This Is Speedometer Volume 1 & 2 (FSRCD075) by Freestyle Records
(PRESS RELEASE) Originally released separately on the small, independent Blow It Hard label, and very hard to find, now in 2011 Freestyle Records is proud to announce the re-release of Speedometers debut and follow up album, available on one CD for the first time!

Back in 1999, The UK’s premier funk band started out as an instrumental quartet gigging in small clubs in the Southeast of England, paying homage to classic funk tunes by artists such as The Meters and The JB’s. The band soon expanded and writing original material, adding the highly regarded horn section and vocalists in 2001, which has enabled them to deliver the powerhouse deep funk sound they are renowned for. In addition to their own albums, singles and live shows, Speedometer have backed many of the US funk & soul legends including Sir Joe Quarterman, Eddie Bo, Marva Whitney, Sharon Jones, James Bell of The Highlighters, Lee Fields, and funky jazz vibes man Billy Wooten. All these artists were blown away by Speedometer’s authentic, original soul-funk sound.

Now over 10 years later, Speedometer have become one of the most respected, best selling and hard working contemporary funk bands around, with many European and Far Eastern tours under their belt, and their most recent album The Shakedown (FSRCD082) being a critical success and securing club and radio play across the world, featuring as it does collaborations with US Soul music royalty, the amazing ex James Brown vocalist Martha High!

This Is Speedometer 1 & 2 also boasts brand new artwork and sleeve notes from the band founding member and leader Leigh Gracie and DJ, producer, author and of course, star percussionist Snowboy, as well as a selection of sleeves, gig flyers and live photos that illustrate Speedometers development over the past decade. From the gritty funk instrumentals like Monkey Stick, the punchy latin grooves Return To Palmetto through to the 60´s style soul ballad You Got Me Started, it´s all here on one handy 22 track fully remastered album, This Is Speedometer Vol 1 & 2 is the perfect retrospective collection from one of the greatest funk outfits of the last decade.