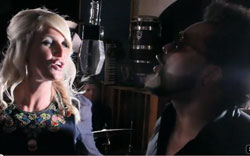 Freestyle signings Speedometer have a crack at the Eddie Bo/ Inez Cheatham classic sampled by DJ Shadow, Fat Joe and The Snugs among others. They rope in vocalists Ria Currie and Myles Sanko and re-imagine the gritty New Orleans original as something a bit lighter and faster and maybe a bit more like JB would have done it. New LP ‘The Shakedown’ is due later this month. Press guff below links and vid:
Speedometer – Myspace

(PRESS RELEASE) Word is getting around that Speedometer are about to go stratospheric with their new album ‘The Shakedown’ which marks a step change in the groups sound and style, featuring more vocal led songs, a wider musical horizon, and the vocals of regular singer Ria Currie and guests Myles Sanko, Natasha Watts and the living soul legend Martha High.

And just to wet your appetite, Freestyle Records is very very proud to present the video for the forthcoming 45 ‘Lover & A Friend’ which will be released late September, the new, highly anticipated album hits the streets mid October, but in the meantime…check out Ria, Myles and the band in action…

Posted on 5th September 2010 no comments