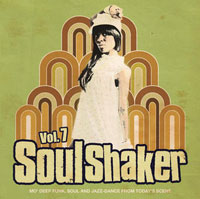 Having sorted out the latest volume in their Let’s Boogaloo funk, soul and boogaloo series, it was only right for the Record Kicks label to turn their attentions to their other ongoing series – Soulshaker – to further explore the wildly different world of funk, soul and afrobeat. Once again it’s a tastefully put together cross-section of the current scene featuring many familiar names. Highlights include a wax release for that competition-winning funky remix of Ray Harris And The Fusion’s Scaramunga, the hayseed funk of Gimme One More Chance (one of the best cuts off the very well-produced new Diplomats Of Solid Sound LP), The Crabs Corporation’s ska cover of Herbie Hancock’s Bring Down The Birds (as sampled by Dee-Lite) plus the Pepperpots’ northern soul number Real True Love. It’s the band with the best name who take the laurels though. I’m talking about Shaolin Temple Defenders of course, whose low slung horns ‘n guitar number, I Know What It Is, from new LP Take It Slow is about as dirty as Soulshaker 7 gets.

Having said that, I could have done with things getting a lot more dirty a lot more often throughout this comp and I’m not sure there’s anything heavy-hitting enough to match, say, Quantic & Alice Russell’s Pushin’ On or Breakestra & Choklate’s Take My Time from Soulshaker 3, for example. Where’s all the hard-drinking, heavy-duty funk stank? Enough of the jazzy-politeness already! That’s what comes of drinking too much espresso – the drink’s a fucking menace. I bet it wasn’t Eddie Bo’s tipple of choice. Or Spencer Wiggins’. Or Fela Kuti’s. But I digress…the cover’s nice isn’t it? And did anybody else notice how the hook on The Liberator’s Rags To Riches sounded a bit like ABC’s The Look Of Love..?
(Out 25 October on Record Kicks)
Listen to Soulshaker Vol. 7

(PRESS RELEASE) SoulShaker hits no.7 with another trip around the world searching for the coolest in (deep) funk, (northern) soul, (jazzy) afrobeat and more. Once again on the new SoulShaker all the bands being featured are from the contemporary scene, with lots of exclusive contributions and previously unreleased stuff on cd compilation.

On the funk side we have the original vocal version of “His Voice” by Elder Williams Smith produced by New Zealand funk addict Kris Holmes and brought to popularity by Jazzman Gerald who spotted the instrumental version on his Let’s Boogaloo comp. Here we find the original vocal version, followed by Ray Harris & The Fusion Experience “Scaramunga (B Dub rmx)”, winner of the Scaramunga rmx competition and brand new singles by Dojo Cuts and Shaolin Temple Defenders.
A bit of afrobeat with a little teaser from the much awaited forthcoming The Liberators debut album expected to land in 2011 and our folks Kokolo Afrobeat Orchestra.

On the soul side we have Spanish Pepper Pots produced by Dap-kings guitarist Binky Griptite and a contemporary northern soul stormer by The Teenagers feat skinhead reggae legend Roy Ellis (Symarip/Pyramids). Also funky-jamaican courtesy of Los Granadians del Espacio Exterior and The Crabs Corporation, more nitty gritty with exclusive new singles from Baker Brothers, Hi Fly Orchestra and Ray Lugo LES Express and much more. With such a lineup of artists there’s really not much to add, SoulShaker Vol.7 is where it’s at….see ya on the dancefloor!