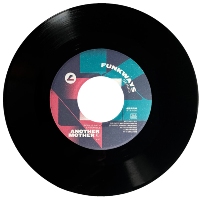 …and back to something funky. The hands of Lucky ‘Joel Ricci’ Brown are all over laid back, horns-laden 45 Another Mother Pts 1 and 2 from Soul’s Path Ensemble. First up is Part 1, a sparse barnyard strut all about the drums and horns and not so much a song as a musical impersonation of a cocky young rooster. And what do cocky young roosters do? That’s right they stake out their territory – and once they’ve done that? Why they run shit of course – which this nine-piece band proceed to do on the uptempo funky disco boogie of Part 2. This release is the ninth in the Wax Thematique catalogue and the latest in Lucky Brown’s Funkways series on said label.
(Out now on Wax Thematique)