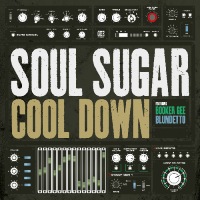 Soul Sugar’s latest single, Cool Down, provides a taster of what to expect on their forthcoming fourth album, Excursions in Soul, Reggae, Funk & Dub, and if it’s anything to go by that’ll be a very sweet main course. Soul Sugar bandleader Guillaume Metenier has not only co-produced this track but roped in fellow countrymen Blundetto (for the guitar), Blackjoy and – er – himself, under his Booker G nom-de-plume on synth and organ. Although some of the tracks on the album in question have seen a previous release (and been covered on MB such as Luther Vandross and Marvin Gaye covers Never Too Much and I Want You respectively) the hazy summery dub of Cool Down has been previously unheard. As if that’s not enough, the band have also just digitally re-released the remix of their cut I Want You by reggae production giants Sly & Robbie – you know – just in case you’d forgotten that the cuts you have heard are heavyweight business.
(Out now on Gee Recordings)