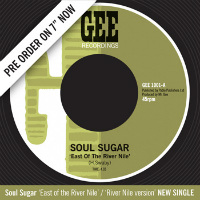 Soul Sugar follow in the footsteps of Augustus Pablo with their new single and cover of Pablo’s ’77 classic East Of The River Nile. Those with more than a basic knowledge of the reggae legend will know that literally ‘following in the footsteps’ of Pablo would involve producing a large body of well respected musical work, smoking a prodigious amount of ‘erb and ultimately passing away due to a collapsed lung after only forty four years. Lucky I was only speaking metaphorically then. Here we are presented with a dirty great lo-fi funky reggae rework of Pablo’s track and we should be rather pleased with the Parisian crew’s version which comes out (correctly) on wax and gets – er – versioned on the flip.
(Out now on digital/ mid-November on Gee Recordings)