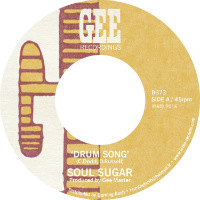 Drum Song finds Soul Sugar‘s Guillaume Metenier re-imagining the afrocentric 70s cut of the same name by former Skatalite and Studio One music director Jackie Mittoo as a smouldering organ-led reggae number. A protege of Dr Lonnie Smith, Metenier recorded this cover in a loft in the south of Paris and the release is out, correctly, on seven inch vinyl. The track originally featured as part of Soul Sugar’s Hands On EP from a few years back and this single release is a prelude to new material to be released on 12 inch alongside tunes from The Viceroys and Vin Morgan later this year.
(Out now on Gee Recordings)