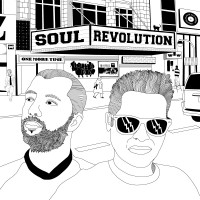 Remember the more soulful wing of the underground Cali hip-hop sound of the late nineties/ early 2000s? I’m mainly talking about Quannum projects – er – projects – Blackalicious, Latyrx, Lyrics Born’s solo stuff – that sort of thing. Soul Revolution do – and they’ve taken the most soulful end of that already soulful body of work and run with it. ‘Soul’ – it’s in their name see? They’re West Coast too- although in this case it’s the west coast of France. Still, there are geographical similarities – miles of sandy beaches, surf, gorgeously bronzed beautiful people – just without all the smog and right wing former actors in charge of politics.

One More Time is the twelve track full length album that follows the funk 45-sampling title track-released-as-single last year. The core of Soul Revolution is ‘the lion of Bordeaux’ and Dreego – the former of which duo, contemporary funk junkies may recognise as being lead singer in what MB has long held is one of the best names (although their music’s not bad either) in contemporary funk’ – Shaolin Temple Defenders. The pair are joined by a swathe of guests on the LP – Lady Dakween, Lisa Wieland, Vinz, Bastien Picot, Def3, Uzer, Tareek, Juice, The Jouby’s, and genuine U.S. west coast rappers Pigeon John and Ian Sloane for that full ‘collective’ vibe.

Essentially Soul Revolution is the sound of urban summer. Musically it skips from funky hip-hop – (the title track) – to Latin shuffles (the Natascha Rogers-featuring Avolta) and wistful tales of what happens when you meet someone on tour in the Pigeon John/ Ian Sloane/ Lisa Wieland-fetauring Now That I Know You. Best cuts? The title track and smoky jazz-club cut Byrd where Wieland (again) lends a Badu-ish air to the proceedings. In a nutshell, laid back hip hop beats, a sense of Stevie Wonder’s Talking Book-era funk crossed with the more chilled Quannum stuff, a touch of jazz, with a range of mellow raps and sung vocals. Let’s face it, put this on and you’re going to get laid, aren’t you?
(Out 13 November on iTunes and limited white vinyl on 27 November on Soulbeats Records)