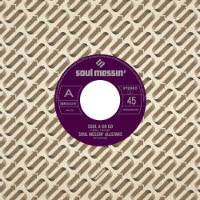 There’s no messin’ from the Soul Messin’ Allstars with debut 45 Soul A Go Go featuring two different but equally catchy versions of the same track on either side of what is liable to be a most in-demand piece of life-affirming wax. The tune was penned by Cookin’ On 3 Burners’ Jake Mason along with Mondo Rock’s Eric McCusker and celebrates Melbourne’s monthly Soul A Go Go night. The A-side features Josh Teskey and employs a stomping northern soul beat layered with a Motown lushness while the (initially) less busy flip featuring Cara Robinson & The Wolfgramm Sisters swaps horns for piano tinkles and a Wurlitzer and employs a looser, funkier beat. You’ll have trouble picking a favourite though and keep swapping every time you think you’ve worked it out. Once thing’s for certain however, you will most certainly want to be going down to Soho, to re-align your mojo
(Out 18 October on Soul Messin’ Records)