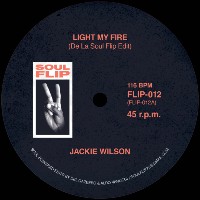 You’re damn right the Soul Flip crew is back – and with a vengeance too after what has been a fallow year thus far following a mere two booties in 2020. It’s all a far cry from 2019 when the crew managed no fewer than six 45 edit releases plus a vinyl LP collecting all previous edits and were making plans to achieve global old soul edit dominance! Still, this funky ‘De La Soul’ breakbeat remix of Jackie Wilson’s Doors’ cover Light My Fire on side A of Soul Flip Edits 12 will rapidly re-ignite interest in all things Soul Flip as well as delighting b-boys and girls everywhere. It’s all occurring on the other side too where The Supremes’ The Happening gets rhythmically augmented in a manner guaranteed to pique the interest of those with a Motown-ish disposition.
(Out 2 July on Soul Flip Edits)