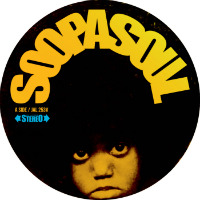 Fresh from the hot-cakes-level success of his massive recent triple run of Soopasoul Edits (his first releases of any kind in seven years), DJ Soopasoul appears to have decided that the time is ripe for something original too. Enter his forthcoming Pushin’ Weight 7″ – a title that suggests a celebration of narcotics distribution perhaps? Well, blaxploitation flicks were known for their focus on such shenanigans and this breakbeat tune is informed by the classic combo of congas, sinuous bass and crisp drums (as well as both fuzz and wah-wah guitar) that frequently defined the themes of said flicks. Not that this in any way prepares you for the arrival of a tenor saxophone, at just past the one-minute mark, which remains for almost all the remaining two minutes much as if Courtney Pine had just sauntered onto the set of Superfly and told Ron O’Neal to do one. That’ll throw the bastards. Fans of sax-y time will also be pleased with B-side oldie entitled – er – Brand Nu which gets heavy on an acid jazzy breaks-tip. See what I did there?
(Out 18 August on Jalapeno Records)