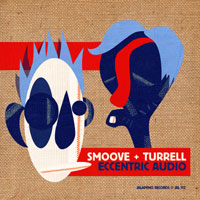 Nu-northern soul boys Smoove and Turrell (a.k.a. Berry Geordie and Smokey Turrell) are due to return shortly with second album Eccentric Audio which is all set to propel them into mainstream consciousness.

As before, Turrell rides as classic-voiced vocal shotgun to Smoove’s driving force behind the beats. And, it has to be said, Smoove (or rather ‘smooth’) is frequently the word this time around as their bid for more widespread (and well-deserved) recognition finds Eccentric Audio featuring more than a few slick late seventies style disco/funk than it’s predecessor – a fact acknowledged in at least one of the track titles – In Deep. Last night a Geordie saved my life? Yes, the sly dogs have gone a bit ladies night for their second LP a fact which is evident even from opener Broke which, despite having a melody that recalls De La Soul’s Eye Know pimps along on a shamelessly pulsing glitterball rhythm as do Falling In Love, I Need A Change and, of course, In Deep. It’s not all about the boogie though and the placing of the moody, downbeat Don’t Let It Go To Your Head is an unusual choice for second track. There’s also the pre-breakbeat-Motown rhythm commonly associated with the northern soul sound to be found in ‘most obvious choice for a single’ Hardwork where Turrell gives a high maintenance woman her marching orders, and Let Yourself Go where it is augmented by some Latin horns and percussive styling. Also, if you’re looking for this year’s Beggarman’s Disco you’ll find it in the shape of Slow Down – video below.

There’s definitely a sense in which the harder edges of the sound of Antique Soul have been sanded down for Eccentric Audio though and personally I could have done with some more of the rawness of I Can’t Give You Up or Hammond at times. Nevertheless, Smoove’s flawless production, Turrell’s unmistakeably effortless soul rasp and a tracklist rich in potential singles suggest that Eccentric Audio will be responsible for making our intrepid duo rather better known by the end of the year than they were before. Album preview player below, Slow Down video below that and proper press guff below that. ‘Ave it!
(Out 6 June on Jalapeno Records)
Eccentric Audio album preview by SMOOVE AND TURRELL

(PRESS RELEASE) Smoove & Turrell are back with their second album Eccentric Audio. All questions about a difficult second album are brushed aside with the first listen which shows John Turrell at the top of his game lyrically and vocally while Smoove delivers a timeless production that references but never mimics the greats of soul, hip hop, jazz and rhythm and blues. More focused than their first album, tracks like Money are influenced by the politically aware black music of the 70’s while the incredibly melancholy Wasted Man owes as much to songwriters like Nick Drake and trip hop like Massive Attack as it does to Funk & Soul.

First single Slow Down sees John deliver a powerful vocal that evokes the ratpack at their height (assuming Frank, Dean & the boys had lived through acid house and a youth growing up in the North east that is), Broke delivers a riff that De la Soul would have been proud of and Higher is a full tilt Northern Soul stomper. Never ones to forget about what their fans want – live favourites Let Yourself Go, Hard Work and It’s the Falling In Love make sure that this is an album you could put on repeat at a party.

An accomplished DJ who makes his living by making people dance, Smoove’s hand is all over the album sequence which builds and drops, ebbs and flows until as the final bar rings out the listener knows they have just been part of Something Special. And that’s all you can ask for in an album really. Smoove & Turrell will release a double A side single Slow Down / Broke to precede the album.

Eccentric Audio will be released on Jalapeno Records on June 6th.