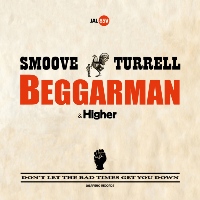 Smoove & Turrell may have released their debut LP Antique Soul all the way back in ’09 but it appears the clamouring for wax copies of that LP’s third single, Beggarman, still haven’t let up – naturally because the song is an irresistible call to the soul dancefloor.  Lyrically it was a call to keep spirits high in times of hardship and it is telling that while the word ‘austerity’ might have vanished from the lips and pages of the media, everyone (apart from the ‘elite’ whose wealth has actually increased) is still feeling the pinch, twelve years down the line.  Still could be worse – let’s not forget those ‘bad old days of the 70s’ when Labour were in power for a whopping – oh…wait…was it only five years?   But while the economy might continue to tank due to a toxic mix of incompetence and corruption, the good news is that S&T’s Beggarman is back out on wax and 7″ wax at that!  What?!  You want more good news?  Alright then, how about this – Eccentric Audio track Higher gets a ‘first-time-on-45’ release on the flip!  You’ve never had it so good! Now get yourself down the beggarman’s disco, proles! After you’ve bought a copy, obviously.
(Out 4 June on Jalapeno Records)