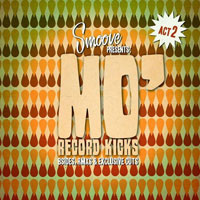 In which Smoove presides over what is looking all set to become Record Kicks’ third regular compilation series alongside the Let’s Boogaloo and Soulshaker efforts. You’d have thought the king of neo-northern soul and jazz’s schedule of being an international superstar DJ playboy, running record labels Wack and Wass, remixing all-and-sundry and his own project with smoky-voiced legend John Turrell would be quite enough to have on your plate but apparently Smoove’s plate is considerably bigger than average.

Essentially a ‘B-sides and rarities’ affair, Mo’ RK II isn’t afflicted by the dubious consistency of content that such a tag normally signals and is of a quality with recent Record Kicks compilations. The usual RK suspects are all aboard of course, along with The New Mastersounds and Nick Pride & The Pimptones – both in the guise of a Smoove remix – what were the chances? You have to wait till the second half of the collection for the best tracks – Crabs Corporation’s rocksteady banger of a single Let It Go and Big Boss Man bassist The Hawk with his Under My Skin featuring the slinky tones of soul songstress Little Hannah Collins and which also appeared, (funnily enough) on the monkeyboxing mixtape Filthy Rhythm, Dirty Soul back in January. Elsewhere, things are espresso-funky, afro-funky and sometimes just plain funky – though rarely dirty enough for my tastes. Honourable mentions have to go to Ray Lugo and Roxie Ray for the hypnotic Love Me Good and Trio Valore for the blazing organs of Fuoco (or ‘Fire’ as Jimi called it). Preview it via the player below or Smoove’s very own soundcloud Mo RK II promo minimix.
(Out 18 April on Record Kicks)

(PRESS RELEASE) MO’ RECORD KICKS is back! And Act II is an even heavier collection of RK exclusives, b-sides, remixes and material that appears on CD and compilation for the very first time. The man behind this fine selection of RK sounds needs no introduction, DJ/Producer SMOOVE has been an avid collector of all that is funk for more than 30 years and is one half of the renown duo Smoove & Turrell. He has releases out on Acid Jazz, Jalapeno and Record Kicks to name a few, as well as having founded the labels Wack Records and Wass Records. Not only did Smoove lovingly hand-pick each cut that appears on MO’ RK II, but he is also responsible for 2 of the first-rate remixes that appear here: THE NEW MASTERSOUNDS and NICK PRIDE & THE PIMPTONES both get a Smoove reworking, while brand new afro-funk combo from Sydney THE LIBERATORS are remixed by Kokolo head honcho Ray Lugo, THE DIPLOMATS OF SOLID SOUND are given the Lack Of Afro treatment, RAY HARRIS & THE FUSION EXPERIENCE get a makeover by Valique and “Are You Ready” by MR. COMICSTORE feat. NICOLE WILLIS appears in a discomix version. Other highlights of the compilation include a cracking gospel funk piece by WILLIAM JOSEPH FOWLER & THE DISCIPLES, some deep funk by recent RK signing HANNAH WILLIAMS & THE TASTEMAKERS, and brand new material by Big Boss man’s bass player Scott Milsom aka THE HAWK. Plus singles by THE BAKER BROTHERS, LINK QUARTET, FLOYD LAWSON, CRABS CORPORATION and more!

From deep funk to afrobeat, early reggae and vintage soul, MO’ RK II packs in the best of the Record Kicks sound. Whether you’re a cool cat or a funky monkey, this collection will have you out of your seat and ready to hit the dancefloor at any time or day!