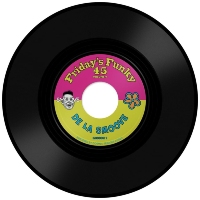 I don’t know, nothing for ages and then four come along at once – well five technically, though one is a re-release. I’m on about Smoove mash-ups of course – the very thing, in fact, that our Berry Geordie set Wack Records up for back in the day. And so it is that Wack Records 19-22 (a.k.a. Sunny Juice, It’s All Good, Skeelo Wonder and Hall & Soul) get a simultaneous release. Well – when you’ve made a special mix of tracks for BBC 6 Music it’d be rude not to release them! So that’ll be new stuff mashed with old stuff, old stuff mashed with old stuff; reliably feel-good beats across four cuts of party breaks variously informed by disco, boogie, hip-hop and soul along with a host of unwitting ‘guest’ vocalists Lizzo, Chaka Khan, De La Soul, Skee-Lo and – er – Darryl Hall & John Oates. The more alert among you will have already noticed that’s only four tracks and earlier on, the monkey said ‘five’. And this is where the wax action comes in for the track Hall & Soul also makes it onto the 45 format along with a big one from the Smoove archives. That’ll be De La Smoove then (a.k.a cut n paste De La Soul ‘megamix’ De La Smoove Lesson 1) which originally came out on 45 on the Digga Please label. Of the five, this last is the only one not to receive a digital release this time around and, just for jollies, the seven inch comes out on the Friday’s Funky 45 label rather than Wack. There – now you’re properly clued up on the moves Smoove’s been making of late. Might be time to make some of your own. Players below – and check the Skeelo Wonder video courtesy of the curiously-named Pony Sixfinger.
(Wack 19-22 out now on Wack Records/ De La Smoove b/w Hall & Soul out soon on Friday’s Funky 45)

Posted on 14th September 2020 no comments