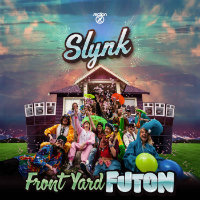 Possibly a front yard futon in BC is a different affair to the sodden, mildewed, rotting pile that such a title conjures to the British mind but then again, having experienced the full might of a downpour in the ‘temperate’ rain forests of the Canadian West Coast, I’m not so sure. Slynk must have been thinking of his native Australian West Coast where you must be able to leave anything outside for up to a couple of hundred years without fear of it being touched by a single drop of moisture. Barring the odd cyclone.

Whatever his inspiration though, with Front Yard Futon, the Brisbane to BC transplant Slynk takes time out from all that remixing and booty-mashin’ to drop ten compositions which (while they may contain the odd sample here and there) are mainly original. And while, in terms of sound, his bed is firmly made up with decidedly glitch-influenced twenty-first century nu-funkiness, the keys, squelches and pitch-bending sounds all betray a fondness for planks of underlying Clinton-esque late 70s and early 80s funk. There’s even a sense of DC go-go in there too while the closing collab. with Stereocool (featuring singer Ace) Again, provides a bit of face-melting dnb. Five of the cuts on this are collaborations (with JPOD, Beat Fatigue, Stereocool and Mr Bill (twice)) and four feature other artists – AfroQBen, Max Ribner, Dunks, Timothy Wisdom and Ace and you can expect everything from in-your-face beats to wafty, glitch whimsy. Personally, the monkey was most feeling the mid-tempo funky breaks of Graffit Alley. Probably not the wisest place to leave your futon though.
(Out now HERE)

Posted on 1st September 2015 no comments