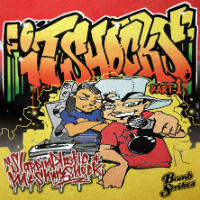 Slappin Plastic and MC Shureshock team-up for a lively slice of Oz-hop with single It Shocks – a track packing so much party punch that it had to be released through two different labels. Sugarbeat are in charge of the split personality affair that is Part 2 on which The Original Rude Boy mix can’t make up its mind whether it wants to be a garage-y breaks affair or a garage-y house affair while Spenda C jumps from dancehall influences old to dancefloor influences new with total abandon. Bomb Strikes, on the other hand, get their hands on the heavyweight 2016 take on early 80s block-party music that is the OG Mix and the Pimpsoul remix which finds and uneashes the original’s latent bass-wobble potential.
(Out now on Bomb Strikes)