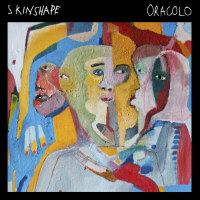 Skinshape (a.k.a Will Dorey of Horus Records) follows-up his self-titled debut LP of last year with an impressive end-of-year effort that falls out of the psychedelic tree and hits every single branch on the way down. Oracolo combines sixties American roadtrip psychedelia with its slightly more pastoral English sixties cousin, throws in a healthy smattering of the more organic side of mid-nineties trip-hop and there’s even a sizeable dose of the more way-out acid-fuelled elements of early 90s baggy too. It’s a little bit like driving along the edge of the Nevada desert, somewhere around Barstow, in a bus handing out free cups of ‘special’ Kool-Aid, with Syd Barrett, Ian Brown and Clive Deamer on board.

This sample-free affair is drenched in washes of retro guitar pedal effects and sample-friendly syncopated drums. Single and instrumental opener Mandala, speaks of high plains drifting, Old Days would make you think of deserted southern Californian beaches (but for vocals which are obviously from this side of the pond) and Detroit foregrounds a complex drum pattern. Then there’s Left With A Gun which slows things down for a Beatles-meets-Mo Wax trip-out while Rubber Gloves and closer The Man Behind The Mirror are asking for employment on a latter-day spaghetti-western soundtrack. Best of all however is another vocal cut, Summer, with its crunchy drum breaks, washes of guitar and the baggiest of vocals that recalls that recalls the very best of the early Madchester sound – if DJ Shadow had been on production.
(Out now on Beatnik Creative)

Posted on 18th December 2015 no comments