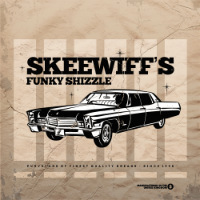 Funky Shizzle?
No, it’s ok thanks – I had one this morning. Oh – sorry – you meant the latest from Skeewiff – the man who’s carried the torch for two generations of funky breakbeat antics?! Well, in that case then it’s an emphatic yes please! What’s the deal?

Well – it’s a project that started in 2008 but then got shelved. Then it was on again. Then off. Then on. Then off again. Then…

Frankly a right variety of shenanigans but all loosely linked by dint of being – well – funky. As you can tell by the range of guest spots from the likes of Jungle Brother Bam, the freak power of Ashley Slater, the MC possibilities of Kiwi MC Imagine This, the ghetto funk gravitas of Sammy Senior, and the funky weight lent to one track by The Brand New Heavies, not to mention the presence of Beat Fatigue, Dan Hewson and Cab Canaveral.

Blimey! That would suggest everything from funky, party hip-hop, to dirty seventies funk, to acid jazz, to wobbly breaks and even library music…

Have you heard this already?

…because that pretty much sums it up.

Gotta be the Bam-featuring opener, Ashley Slater getting his mothership connection on with Slam Your Funky Funk-Funk and the ghetto-KPM antics of the Dan Hewson-featuring Hey Charles! Do The Wob.

Best leave that to Bam: “Yeahhhhh making music on a remote island, we got a surf n turf on the grill and a beer on chill!”
(Out 1 June on Pedigree Cuts)