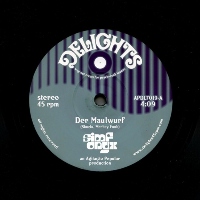 It might be coming up for Christmas but here’s a glimpse of what the new year holds in store from Markey Funk’s Delights label – a SimfOnyx 45 entitled Der Maulwurf b/w Eolomea. The former track delivers crunchy retro sci-fi-isms that take their cue from East German cinema.  In practice, this means a staccato kick/snare drum pattern foregrounded due to sparse additional layers of percussion that is absolutely drenched in vintage synths. The track’s name means ‘mole’ in English and it tunnels right in there like one too. Flip it over and, while the ambience is the same – i.e. funky retro sci-fi, the tempo is way down and you’re in for an altogether more ambient sonic experience as if adrift on the star winds or something.  Mind you, when that sounds like this, it’s not a bad state to be in at all.
(Out 14 January on Delights Records)

Posted on 18th December 2021 no comments