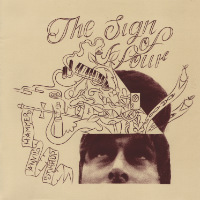 You see? This is what happens if you refuse to listen to music made after 1969 and buy all your clothing from Atom Retro. You make an album of eleven tracks of psychedelic-jazzy-latin-library music instros that sound like incidental music accompanying the part in any sixties film where a straight character takes drugs and the track titles are things like Fruit Juice For Everyone and Sun Suite Agaricus Campestris. The thing is though, that the incidental music of any part of any sixties film where the straight character takes drugs is invariably most agreeable. A bit like Sign Of Four‘s Hammer, Anvil & Stirrup.

As it turns out, the man behind this project is Miles Newbold of The Natural Yoghurt Band – another psychedelic library band-influenced project also on Jazzman Records. Incidentally, the final two tracks on this LP (the previously mentioned funky jazz trip Sun Suite Agaricus Campestris and its sinuous sister track Sun Suite Humulus Lopulus) are those of Sign Of Four’s alter ego Sun Suite – for whom jazz cigarettes and acid adventures seem to be the fuel of choice. I can see a pattern emerging here. If all that sounds like your kind of trip you’re in for a treat. It will available for download, on digipack CD and for the righteous and faithful on two vinyl 10″s with hand-painted sleeves.
(Out 8 April on Jazzman Records)