SHIRLEY DAVIS & THE SILVERBACKS: Keep On Keepin’ On 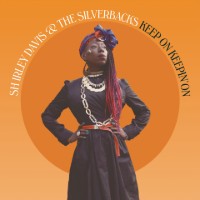 Another Shirley Davis & The Silverbacks single already? I sense an album in the offing! Before that though, here’s the title track, Keep On Keepin’ On, a big horns-totin’, b-boy and girl-friendly uptempo drums affair with our Shirl belting it out over the top. Word on the street is the title was what the late great Sharon Jones texted to Shirley after hearing her sing – and with good reason. But what are those lyrics about? Getting a call in the middle of the night, putting sneakers on – possibly not a booty call then – but did I hear that right, ‘heels in her hand’ – maybe it is then. Either way a mysterious and clearly compelling call to action. Pretty much what punters will feel when this gets dropped. How to represent such goings on in audio-visual format though? Maybe different dancers going hard at it, against sundry night-time downtown backdrops where there’s room to boogie while Shirley goes through more costume changes than you’ve had hot dinners. Yep – that should do it.
(Out now on Lovemonk Records)

Posted on 27th February 2022 no comments