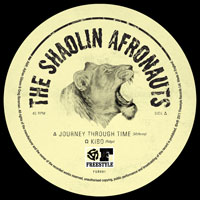 Is it Afrobeat season or something? First Tramp Records recent Contemporary Afrobeat, now this and there’s also new drops from Mo’ Horizons and Los Chicarrons about which more to be posted later – if I haven’t suffered afrobeat overload. Which is quite likely. Oz-crew the Shaolin Afronauts have certainly cornered the market for coolest afrobeat outfit name but then regular readers will know the monkey’s a sucker for kung-fu references. Journey Through Time goes funky Fela-style while with Kibo they get their sax on a bit more for all the afro-jazzbos. Apparently there’s an album on the way too – Flight Of The Ancients – if you’re into that sort of thing.

Journey Through Time – The Shaolin Afronauts(FSR091) by Freestyle Records

(PRESS RELEASE) The mysterious afro-soul of The Shaolin Afronauts first echoed across the dance floors of Australia in early 2008. Heavily inspired by the sounds of 1970’s West Africa, Ethiopia and the pioneering avant-garde jazz artists of the same period, the Shaolin Afronauts draw on the this highly innovative and sometimes volatile era in music, using it as inspiration to create music with the same fire and intensity.

Though there is something refreshing and original about the Afronauts, their music could be described as somewhere in between the heavy Afrobeat of Fela Kuti and the Ethio-Jazz of Mulatu Astatke. This debut 12 inch single combines all these elements, Journey Through Time having a hypnotic, spiritual feel, whilst the B side Kibo is totally exclusive to this 12 inch single, and is an upbeat positive groove, both tracks only hinting at the delights the forthcoming album Flight Of The Ancients (FSRCD/LP085) will contain.

Posted on 8th February 2011 no comments