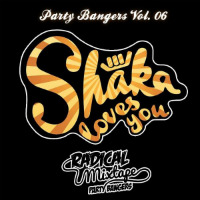 Just backdoored the peak at Teahupoo? Throw out a shaka. Won the latest Billabong XXL? Throw out a double shaka! Vintage VW Beetle or camper driver who’s just experienced the massively unlikely coincidence of passing someone else who drives a Beetle or vintage VW camper? Throw out a shaka – even if you are clueless as to the gesture’s name and origin. All very well – but what do you throw out if you are a shaka? Or rather Shaka. How about throwing out four big party bangers when you take over Vol. 6 of the Radical Mixtape label’s Party Bangers series? More specifically a fungii slab of Kenny Barron-sampling breaks, some glitchy uptempo Loleatta Holloway vibrations, a Jackson 5-sampling dancing machine of a beat and using a bit of Bill Withers inna dnb stylee to wrap things up…Sounds like a plan.
(Out now on Radical Mixtape)