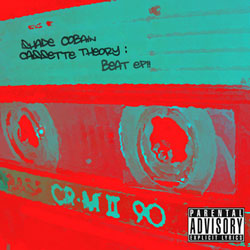 Heads up – it’s free dusty breaks time again. Clearly a man who knows his Memorex C90 from his Sony C120, Shade Cobain hails from Pittsburgh and lists Kurt Cobain (which might explain that tag) among influences which also (more typically) include Thelonious Monk, Pete Rock and The Funk Brothers. Rich on analog hiss, Shade’s cassette-obsessed beats project harks back to mid-nineties sampling of seventies sounds. All the best bits about the cassette era then, without all the irritating bits like: 1. having to use a biro to unspool your favourite cassette because your car stereo has wound it too tight to play in your walkman, 2. the warped sound of a stretched cassette playing once you’ve done this and 3. the lettuce-like crackle of tape salad when you remove the fucker from your walkman in which the batteries have just run out.
Download – Shade Cobain – ‘Cassette Theory: Beat EP’ HERE
And while you’re at it, Shade’s LP of hip-hop rerubs is something you might want to check too…
Download Shade Cobain – ‘Cobainish Remixes’ HERE
(PRESS RELEASE) Shade’s second release, and first instrumental project, pays homage to our favorite media format of yesteryear: the cassette tape. Audio cassettes take us back to a time of mixtapes, home dubbing, and low fidelity. Shade’s project successfully and intentionally brings that nostalgia back with beats that lace together hissy samples with smacking drums and eclectic soundbytes. Throw this in and let the tape rock until the tape pops!