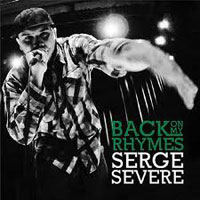 Ok, so not covering Back On My Rhymes, the second album by Serge Severe, might be the second glaring oversight I’ve made this year following my recent discovery of a T Bird solo album which, like this, also came out in January. Mind you, given that I’d never heard of Serge Severe prior to two nights ago when I stumbled across him on hiphopdx.com and given that after a sound googling, he seems to be almost entirely below or beyond the range of the UK rap radar, I might be forgiven. I’m starting to think that the Yanks are keeping all the good shit to themselves. It’s like the French with wine isn’t it?

The short version is that this Portland, Oregon, MC (that’ll be West Coast for the geographically challenged) is setting hip-hop alight with back to basics beats and rhymes and, to be fair a big slice of credit has to go to Universal DJ Sect with with his ultra-funky beats. Last year was by far the worst year for proper hip-hop I can ever remember, but Severe and his new LP are yet one more reason why this year is the best year I can remember for hip-hop in nearly a decade. Don’t take my word for it though – check the vid of debut single Can’t Stop Won’t Stop featuring Braille below. Good luck buying it though– looks like Amazon’s ya lot and mp3 the only format. Listen link below vid:

Listen to Serge Severe – Back On My Rhymes

(PRESS RELEASE) Serge Severe is a Portland mic-slayer on a mission. He is one of the most well-rounded, multi-dimensional MCs in the Northwest, possessing a formidable stage presence, strong song-writing skills, and ferocious freestyle ability. He has shared stages with Hip Hop heavyweights, Wu Tang Clan, De La Soul, Talib Kweli, Goodie Mob, Dead Prez and many more. He has been praised in Okayplayer and URB Magazine’s Next 1000 Column, which called Serge’s music “…a brand of lyricism and humor that are downright Ghostface-esque… Serge is a true wordsmith who isn’t afraid to be himself.”

Serge Severe and Universal DJ Sect have combined forces once again to drop their latest album “Back On My Rhymes”, available in March 2011 through Focused Noise. Severe mixes his razor sharp flow over Sect’s soulful and funky hard hitting production. This time around they effortlessly incorporate some of the Northwest’s best emcees like Braille, Cool Nutz, Illmaculate, Theory Hazit, Luck One, Destro of Boom Bap Project, and Gen.Erik of Animal Farm. Their last album, “Concrete Techniques” was received with great praise from fans and reviewers alike, and was named as one of the top Albums in 2008 by Rapreviews.com and Hiphoplingustics.com.