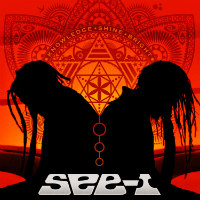 Rasta reggae brothers Rootz and Zeebo of See-I are about to shine their knowledge bright across the irie end of the bass music spectrum again with their second LP Knowledge Shine Bright. The Washington-based pair (and sometime Thievery Corporation collaborators) deliver a twelve track effort that features collaborations with Boston MC Mr Lif, Flex Matthews, Candice Mills and Edy Blu and takes in dancehall, hip-hop, rnb and – er – house. All with a soulful reggae twist of course.

The start of the LP is the business end while the latter half has more of a laid-back vibe. Mind you, if you hail originally from the Caribbean and wear your hair in fat dreads (as these two do) that probably all sounds like business to you. Or perhaps that should read ‘all pleasure.’ Opener Never Give Up provides the sort of lilting soul-reggae positive vibery that might strike a chord with Southern Californian perma-stoned surfer types who form bands like Slightly Stoopid precisely to emulate stuff like this. It’s followed by the more insistent groove, LP highlight and obvious single material of Real Steel which you’ll be unsurprised to find was in fact this LP’s debut single back in December. Up next is King Of The Road – a bouncing dancehall riddim (though See-I’s vocals are smoother than the typically gravelly delivery tradition leads us to expect of such a track) and then it’s over to Mr Lif for fuzz guitar n synth-led reggae hip-hop collab The Boogieman. The reggae-house of Chase forms the LP centrepiece after which there is a marked shift in tone to less hybridised forms of reggae that become progressively more relaxed and dubby to the end of the LP. Presumably as the ‘erb kicked in. See? Aye!
(Out 26 May on Fort Knox Recordings)