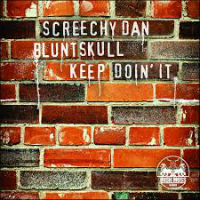 The new one from Brooklyn Dancehall veteran Screechy Dan finds him hooking up with producer and known 90s reggae-boom-bap fiend Bluntskull so it’s no surprise that Keep Doin It should strip things back to the time-honoured recipe of the kick, the snare and the double bass all at around a 100bpm tempo. Elsewhere, Cut La Vis keeps doin it inna old school dancehall stylee, Rukus in a new school dancehall stylee and Bazza Ranks in both a UK garage and a moombahton stylee. Plenty to boom in ya jeep whatever your musical preference, in other words.
(Out now as Juno exclusive/ Out globally 25 August on Irish Moss Records)