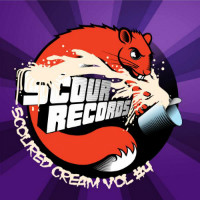 First up is Minoru (no minnow, he) with a ghetto-funked My Babe by Little Walter – only weeks after JPod’s glitch-blues version – because great minds think alike. Lakeshore Drive dig deep in the crates for what sounds like a bit of Big L to deliver the funky, snarly-bassed Two For The Crates. J-Sound invites you to feel a ghetto-funked version of Naughty By Nature’s Feel Me Flow mere months after DJ Maars’ reggae rerub of the same (because great minds think alike) and then Father Funk & Howla provide warping ghetto breaks which wouldn’t mean a thing if it didn’t have swing. Which it does, in bulldozer-loads. Elsewhere Mr Stabalina unites Stevie and 2Pac, Sammy Senior & WBBL sound like they’re uniting Magnum and Jacko and Skiitour gets ghetto-disco-breakin’ with whatever Nu-Mark used on Lay ‘Em Low. Which just leaves Lack Jemmon who provides the catchiest track of the release by doing the decent thing with Audioweb’s final single by ditching the indie guitars and most of the lyrics for the ghetto skank of Theory Test.