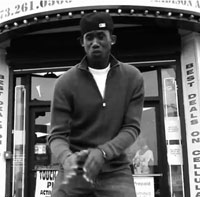 Rising emcee Savant made his move rather quicker than the monkey here, as this, the official video to the Luke Vibert–produced and Nora Perez-featuring ‘Make Your Move’ has been out since late last month. Regular readers will know that this very track was the focus of a closely fought remix competition run by monkeyboxing back in the summer and won by UK-based b-boy breaks producer Krash Slaughta with a mellow brassy beat on a nineties East Coast tip. Cop the original version with the Vibert beat on a DL HERE and stream the remix comp winners HERE. And look for the new Savant/ Krash Slaughta monkeyboxing exclusive team-up soon fam!