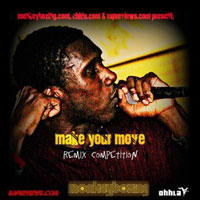 Calling all hip-hop producers, ghetto funk old-school plunderers, mash-up jockeys and other beatsmiths – it’s competition time! Earlier this year true school emcee Savant (a.k.a. Stanstro) linked with OHHLA and RapReviews to drop the fresh original Make Your Move (vid below) which was produced by Luke ‘Wagon Christ’ Vibert no less! Now the acapella is up for grabs! Use it wholesale, chop it, re-arrange and supply your own beats but whatever you do – make it bang! The winning remix (chosen by Savant) will appear as a bonus/ hidden track in Savant’s Crash Course Leak Series and the winner gets to produce Savant’s next single – which will be a monkeyboxing.com exclusive and have a music video! How’s that for a slice of fried gold?