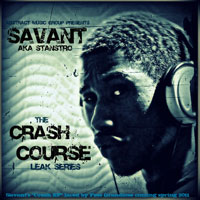 In which Tucson-via-El Paso-via-Chicago (he gets around) emcee Savant (aka Stanstro) does what he does best…or fresh flows over fresh beats to you. For those who need a reference point Savant rocks it like early Mos Def, drops rhymes like “My heat brings more screams than rough sex scenes” and unlike more than a few rappers has a keen ear for a good beat – often dripping with soul. Not only is the Crash Course Leak Series free but his excellent Delayed Entry EP, now year old and gracefully aging is also still gratis, compliments of the man himself. People used to pay good money for shit like this you know!

(PRESS RELEASE) In preparation for Savant’s upcoming tour with G.O.O.D. Music’s Malik Yusef and his impending sophomore release (the Fess Grandiose produced “Crash” EP, coming May 10, 2011), Abstract Music Group presents the leak series “Crash Course”. Every 2 weeks, Savant will be releasing a new record, which will more often than not feature guest bars from a talented member of the expansive independent hip hop community. Already 4 tracks deep, track 5 will be leaked on 01/24/2011 as an exclusive release courtesy of OHHLA/ RapReviews.