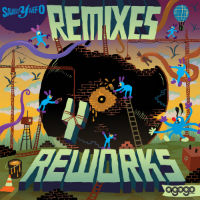 Bet you can’t guess what sort of deal is on offer from Savages Y Suefo‘s next release – Remixes Y Reworks. Oh alright then – yes it is a stack of quality rerubs from among the Hungarian production duo’s favourites of the last few years. The collection includes a proportion of work that the pair have re-done for fellow Hungarian artists such as The Qualitons, Kerekes Band, Marcel and Anima Soundsystem as you might expect but they also draw from work done for the likes of Mr Bird, Kid Loco and Basement Freaks’ side project Smokey Bandits in this fifteen track collection.

Naturally Savages Y Suefo’s remix work ploughs similar furrows to that of their own work and thus features everything from party breaks to downtempo-isms drawing influence from world music, funk, jazz and reggae. Most of the remixes have been previously released but there are a number of exclusives for the likes of Mr Bird, WDR Big Band and Danilo Venturi. Best cuts include a dubby take on Smokey Bandits’ Rooster, the funky, dancehall-tinged downtempo of their take on Kid Loco’s The Night I Had A Smoke With CB and their exclusive take on Mr Bird’s already excellent Cenora Com Noz.
(Out 14 August on Agogo Records)