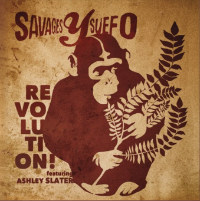 Savages Y Suefo and Ashley Slater pick up where Smoove & Turrell recently left-off tackling the greed of the one per cent with itchy, funky, uptempo heater Revolution. We’ve had enough of all that elite-‘bashing’ though haven’t we? Have we fuck. They don’t need less grief, they need more. Because they’re not getting better, they’re getting worse. Like that business harpy I caught on the radio in recent days claiming that people who took out loans they couldn’t pay back were at least as culpable as bankers for the failure of banks. As if corporations don’t spend millions on expert advice from behavioural psychologists on precisely how to fleece as many people as possible. As Slater’s call-and-response outro says – “It’s all about the money”! No it ain’t.” Also comes with hefty bonus package of a more percussively layered Mr Bird remix.
(Out 4 November on Agogo Records)