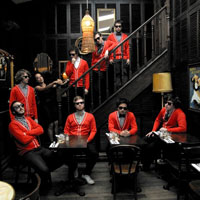 Just to clear up any confusion, Sasquatch is the hairy-assed missing link between man and ape that might live in the temperate rain forests of North America whereas Saskwatch (with a ‘kw’) is the latest in a long line of funky acts out of Melbourne. Their second seven inch release features A-side Don’t Wanna Try – a sweet soul cut in the Bamboos vein and over on the flip Pushin Me Away is a harder hitting funky nugget, which I kind of prefer. Both tracks are vocal cuts featuring the very able voice of singer Nkechi Anele. If that all sounds more promising than a blurry photograph of something brown and furry heading into a stand of giant redwoods, it’s because it is. I certainly, would rather head to Melbourne where regular sightings of this promising nine-piece band are apparently commonplace, than lurk around the forests of the Pacific Northwest in the hope of a second glimpse of something that was probably a stoned hippie in a gorilla suit in the first place. The band’s LP is due early next year – check back for more on that nearer the time.
(Out now – cop it at live shows and HERE)

Don’t Wanna Try / Pushin’ Me Away by Saskwatch by showoffservices

(PRESS RELEASE)
Resolute and larger than life; Saskwatch are a 9 piece Soul Explosion out of Melbourne, Australia. Taking cues from legends like James and Aretha, as well as New York’s bangin’ modern soul scene; Saskwatch smash out their inimitable live show, hard, rough and tight – just like the old days. Leading the pack is singer Nkechi Anele, who will take you from the depths of heartache to overwhelming joy in just one night. Following on from their March “I Thought This Was Love/Kids” 7’’ release; Saskwatch are proud to announce the launch of their follow up 7” over two nights at The Workers Club. The 24th and 25th of November will play host the launch of “Don’t Wanna Try” – a sweet slice of mellow soul, with afro-inspired horns and singer Nkechi Anele’s earnest pleas for peace; and it’s B-Side, the psychedelic, ever-funky “Pushin Me Away”. In what has been a productive year for the group, celebrating two years of their acclaimed Cherry residency, an album in the can, and a slot at this year’s Falls Festival (amongst two 7” releases); these two nights are a chance to catch Saskwatch at their best, premiering new cuts from their Debut album (due out in early 2012), and in some stellar company.

Posted on 19th November 2011 no comments